At 9 months old, Finley most definitely can be described as a "Foodie Baby". He LOVES to eat, and eats just about anything and everything in sight these days. 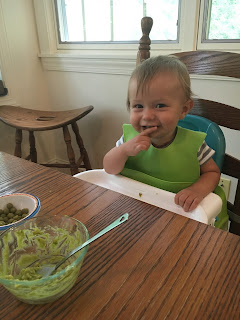 I approached food very differently with Finley than I did with Noah as a young baby. I did not make baby purees for Finley like I did for Noah. Instead, I choose the "Baby Led Weaning" approach with him. Wow, what a difference it made.

Finley eats three meals a day with us as a family (and sometimes 1-2 snacks per day), and he basically eats everything we eat during meal times which makes my job so much easier. I do not have to make him something separate at mealtimes. His serving is just a bit smaller, and we cut his pieces up smaller than ours. He truly enjoys meal time and is such an adventurous eater so far. He will try anything and usually gobbles it all up! 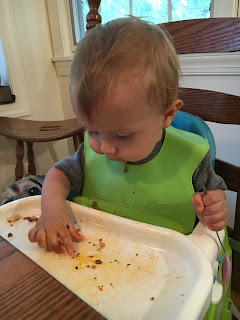 It is so amazing to watch him use his little fingers in the pincer grasp to pick up food and put it directly into his mouth. There also is no frustration during meal time (except the process of getting him into his high chair ;) When the boy is ready to eat, he is ready! Mealtime is a bit messy though. ;) With Noah and the purees, he would get frustrated if I wasn't feeding him fast enough, and he always wanted to eat my food instead of his....hint, hint baby led weaning! But as a first time mom, I was nervous about choking, gagging and food reactions so I would only introduce one food puree every few days before adding a new food. With Finn, we did not waste anytime. I already knew he was sensitive to dairy and corn and we are a gluten-free family, so these foods have not been offered to him so I haven't had to worry about reactions there. He has been fine with eggs and nuts, and we haven't done raw honey yet since it is not recommended until a child is at least 1 year old. 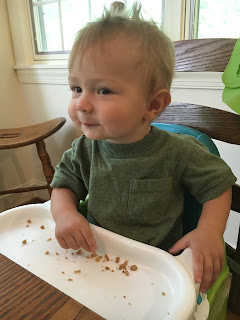 All in all, baby led weaning has been a great experience for our family! For anyone out there who is considering giving it a try, I would say go for it. It truly has made Finley into a real "Foodie Baby" who loves to eat and will try just about anything!! Happy Eating!:) 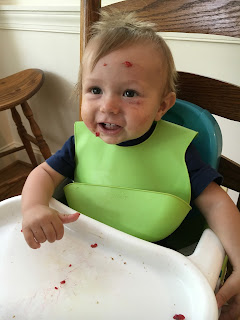