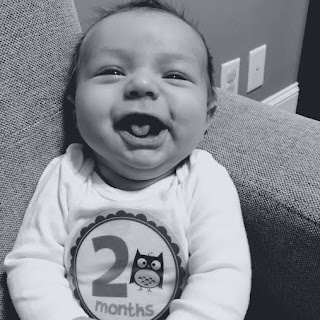 Two months old already, and my have things changed! We hit a bit of a rough patch around 5 weeks old when Finn started to "wake up" from his sleepy newborn state. He became extremely fussy, quite "colic" like, and I knew something had to be up because he was so chill the first couple of weeks. I started watching my diet very closely since he is exclusively breastfeed, and sure enough, I started noticing extreme fussiness after eating dairy (just like Noah) and corn. So, I eliminated both of those from my diet, and viola, the extreme fussiness started to fade. Instead of crying during most of his awake times, he now smiles and coos. He is such a happy baby now and loves to watch his big brother! We are all so thankful his belly is feeling better!

Dislikes: being put down for too long, not knowing where Momma is, the car (unless I am sitting in the backseat next to him), being overtired

Still Unsure About: the bottle (he has taken a little bit of milk from), tummy time (boy is he strong though!)

Sleep: Much better than last month and no more extreme evening fussiness! He is ready for bed at night around 7 or 7:30pm and wakes around 6:30 or 7am. He still nurses anywhere from 2-4 times at night. I am hoping he starts to make more consistent longer stretches soon. He has done some 5-7 hour stretches at night, but he tends to want to nurse more like every 2-5 hours at night. For daytime sleep, he still is ready for a nap every 1 to 1.5 hours and naps anywhere from 30 mins to 2.5 hours. So, daytime sleep is not super consistent right now either. I am thinking about starting him on a loose schedule soon since he seems ready now, and hopefully, that will help make his sleep a bit more consistent.

Eating: Still loves to eat! I am working on spacing his feedings out a bit though (every 2-3 hours) so he fills his belly instead of snacking and wanting to nurse like every hour. ;) 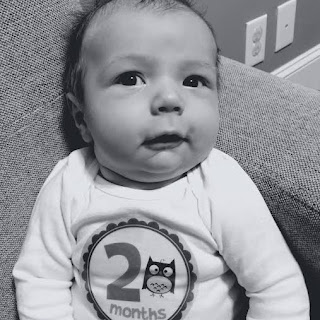