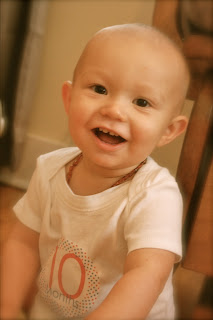 We have hit double digits...10 months already! I cannot believe in just 2 short months, our little boy will be 1 year old. Time is flying by way too quickly.

This was quite a crazy month to say the least. Noah caught Hand, Foot and Mouth virus. He had a high fever (up to 103.4), some vomiting, lose of appetite and bumps on his hands, feet and mouth. No fun at all. :( To make matters even worse, I ended up contracting the virus from him too. I had a fever, painfully sore throat and bumps inside my mouth and on my hands and feet. The bumps on my hands and feet itched constantly for a day and a half. It was miserable, and I felt so bad knowing that this must have been how Noah felt too. :( After about 2 weeks, Noah and I were symptom-free and feeling back to normal. Luckily, Cole did not get the virus. Those two weeks sure were rough.


Noah also started cutting 2 top molars this month, and they are taking their sweet time coming in. So, as you can imagine, he has not been the happiest camper this month with molars cutting and being sick. I ordered him an allspice/amber anklet to wear to help with his molars. Allspice contains tannin which naturally helps tighten the gums so the teeth can push through faster. It also helps with irritability and sleep. I am hoping it helps our little bug! 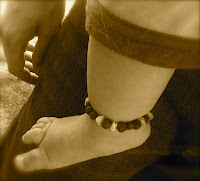 Noah's little personality is coming out more and more these days! He is such a little ham and is full of expressions. He is constantly smiling, laughing and making Cole and me laugh. He is such a social baby these days and is full of babbles. He also started letting us know his likes and dislikes much more this month which is a good thing but also a challenging thing. He has decided that he HATES being on his back which has made diaper changes VERY DIFFICULT. So, I am learning the task of changing his diaper while he is standing. It is quite a site to see....me chasing around a naked boy and trying to get his diaper on especially when it is a poopie diaper. We really need to video it! It is much more challenging of course than diapering a calm baby who is on their back, but so much better than a full scream fest like we were experiencing when he was on his back. Noah also decided that he does not like getting into his car seat. Once he is in it and strapped in, all is well. It is the process of getting him in that is hard these days. However, with a few distracting toys, he is much more manageable....thank goodness! I am sure as he continues to grow, he will start demonstrating even more dislikes. However, these two dislikes are more than enough for me right now!;) 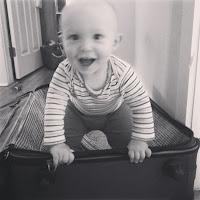 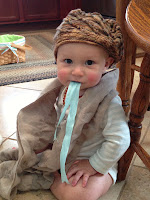 Our Foodie Baby is eating 3 solid meals a day plus 2 snacks. He also still nurses about 5-7 times a day depending on if he wakes at night to nurse or not (Some nights he sleeps through the night and some nights he doesn't. I am hoping he will be consistently sleeping through the night soon!) He loves to eat and is enjoying eating finger foods or eating off of my fork these days. Purees seem to be a thing of the past now. However, he has shown interest in the organic baby food pouches which is nice. They are quite expensive though! Noah used to eat just about anything, and even though he is still a great eater, he is a bit pickier these days. If he doesn't like something, he will just let it fall out of his mouth or he will gladly share it with the pups. ;) Mealtimes have become one of their favorite times of the day! He can now drink from his sippy cup and straws. He loves tasting whatever I am eating, and really enjoys sharing my raw smoothies that I make most days. 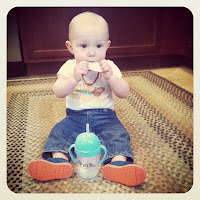 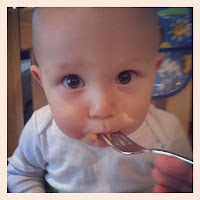 Noah started waving and pointing this month, as well as sharing. He will share his food or toys with us  or the dogs which is so stinkin cute. Such a sweet boy!! He is also going through a very clingy stage with me right now. He wants to be held A LOT. Even though it is very tiring (he weighs 20+ lbs) and hard to get much of anything done, I am trying to cherish this extra cuddle time with my boy. I know once this stage passes, he will be off exploring and independent again, and I am going to have to sneak in kisses and cuddles whenever I can. So for now, I am just going to enjoy my extra cuddly boy!

We are off to Austria for 10 days on Wednesday! We are so excited about the trip (and a bit nervous about the long flight). Be on the lookout for a blog post all about the trip once we are back!

Likes: being held by momma, chasing the pups and kitty, sharing, his purple popper toy, the Becco carrier, the fork, rolling around on our king size bed, naked time
Dislikes: diaper changes, getting into the car seat, the stroller, being on his back