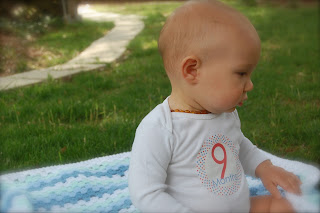 Noah turned 9 months old today. He has now officially been out of the womb longer than he was in since he was born at 39 weeks. Such an interesting thought when I think about it that way since my pregnancy seems so long ago. It is so hard to remember what life was like before our little love bug joined us. Cole and I both feel so lucky to be his parents each and every day!

Noah started clapping this month and has been pulling himself up all over the place. He is constantly standing and holding on to furniture, objects and me or Cole. He has mastered how to go from standing to squatting and standing to sitting. He seems to have inherited some of my yogi balance. ;) He is also getting quite confident with his standing to the point that we sometimes find him holding on with just one hand (kinda nerve wracking). With all of his standing and exploring, we continue to have our fair share of tumbles, but he is one tough cookie for sure. It amazes me how resilient he is at times!

Noah is drooling up a storm these days and gnawing on everything which means another tooth is on the way. The pediatrician took at look at his pearly whites today and saw that his top right molar is starting to cut through. I hear the molars are no fun when they cut since they actually tear the gums (ouch!), so I am hoping Noah does ok with it. :/ Be on the lookout for pictures of more pearly whites soon!

Noah continues to be our Foodie Baby. Some of his new foods this month included: asparagus, bread, tahini, flax seeds, cooked egg yolk, cottage cheese, coconut milk yogurt, grapes, blueberries and black beans. He seemed to like everything he tried this month too. So far, he really seems to eat just about anything. I hope he continues to be our great eater!

Noah did develop a rash this month. :( It started out on his calves and then moved up to his thighs and a bit on the tops of his arms this past week. We originally thought it was just from crawling, but recently we started thinking it might be food-related. So, I started an elimination diet  this past weekend to see if it would get better along with applying coconut oil 1-2 times a day on his rash. So far, we have cut out dairy and gluten from his diet (haven't cut anything out of my diet yet even though I am still breastfeeding). It def. is not getting any worse since we cut out dairy and gluten and started with the coconut oil which is good. The pediatrician took a look at it today and as soon as he saw the rash, he knew exactly what it was. It is a common infant skin condition called Gianotti Crosti (basically an irritation of his follicles). He said it is not a food allergy and just to keep moisturizing it, and it will eventually go away. Phew!! Cole and I were so happy to hear that he is not allergic to dairy and gluten! Hopefully, the rash will clear up soon! 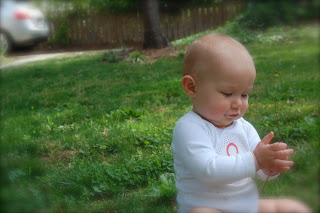 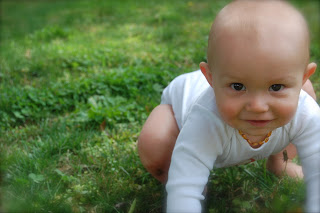 Always on the move (I love this shot!!) 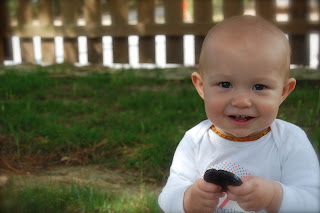 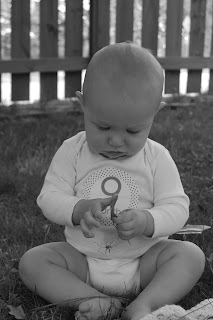