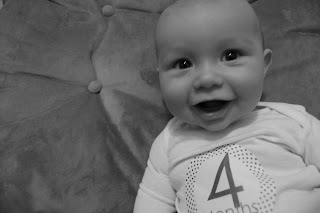 Noah turned 4 months today! Has 4 months really already gone by?? I need to find  a way to slow down time!

I do not have a weight or length measurement for you today, but I will next week after his 4 month wellness appointment. Stay tuned for this growing boy's stats!

Everyday he is full of more and more smiles, sounds and laughs. His hands are still constantly in his mouth, and he is full of drool. He is also so curious about the world now. His new nickname is "The little professor" since he is constantly studying the world around him and taking it all in! It is so much fun to watch him learn everyday and see his expressions.

Noah started rolling back to front this month and over the past few days, he has also mastered getting back over onto his back. A skill that he had learned when he was only 8 weeks old but some how forgot. He is also really enjoying trying to stand  and sit with support and playing in his exersaucer.

We did have a bit of sleep regression this month due to all of his recent physical and cognitive developments. He went from sleeping 8-11 hour stretches to more like 5-7 hour stretches at night.  I think all of the physical movement was making him more hungry at night. So, the past few nights, I have implemented a "dream feed". Noah still goes to bed for the night around 6:45ish, and then I go back into the nursery and feed Noah before I go to bed around 9 or 9:30pm. I "dream feed" him, and then he goes right back to sleep in his crib. So far, it has helped him to sleep much longer again at night! Hope it continues to work well for us! Naps also are starting to improve. I have been doing some "gentle" nap training with him to help extend his short 30 min naps into more like 1 to 1 1/2 hour naps. The book, "The No Cry Sleep Solution" has been a great help for his naps since letting him cry it out at nap time was just totally stressing out our very sensitive boy (can't imagine where he got his sensitivity from ;) I am also starting to be able to nap/rest again during the day some since he is sleeping longer now at nap time. Thank you Noah!

Enjoy the video of Noah rolling from his belly over to his back today. Apparently, I need to move his play mat farther away from his bookshelf. He almost smacked his head in this video....good thing he didn't!

Here is a rundown of month 4 for Noah:

Likes: his exersaucer, doing yoga with momma, his hands, his silk scarf, the boob, holding objects in his hands, listening to stories, singing/humming, bouncing on Momma's yoga ball, long walks in the Becco carrier, Peek- A-Boo, "The wheels on the bus"  and "Here Comes the Bumblebee" songs, sitting in Momma's lap, smiling and talking, being outside, naked time, "Woof Woof" the dog rattle

Dislikes: the bottle, the car seat (he is starting to like it a bit better now), the paci

Noah rolling front to back