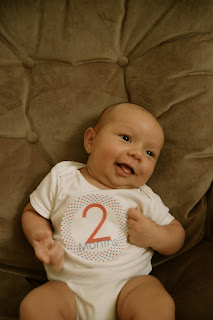 I cannot believe that Noah is already 2 months old and is no longer considered a newborn. It feels like he was just born yesterday on one hand and on the other that he has been with us forever! I can't imagine life with out him now.

Noah had his 2 month checkup today, and he continues to have a clean bill of health and is continuing to thrive! He now weighs 13.6 pounds, is 22.5 inches long and his head circumference is 15.5 inches.

1. Noah is now full of smiles, gurgles and coos. It truly melts my heart every time he cracks that big toothless grin! We think he is just the cutest thing ever (I am sure that every parent feels this way about their baby)! His personality comes out more and more every day, and I would describe him as a very happy baby overall. I truly love spending my days with him. We have so much fun during his play/wake times, and even though I am so happy that he is sleeping well now, I honestly miss him when he is not awake.

2.  Noah is now sleeping so much better! We have had some major breakthroughs this past week actually....thank god! We had a couple of rough weeks regarding him fighting sleep in the evenings even though he was so overtired. Cole and I were so exhausted every evening from trying to soothe him to sleep again and again, so I started a sleep/feeding log about 2 weeks ago to try and help me observe any natural patterns that he was starting to show that might help us get him to sleep better. Basically, I found out that he likes to wake around 7amish and was really starting to get sleepy around 6 or 7pm at night. So, we started trying to get him down for bed around 6-7pm and after tweaking a few things (putting him back in the swaddle-the Miracle Blanket is AMAZING and adding a fan in his nursery to go along with his white noise machine), he has been going to bed consistently around 6:45pm-7pm. He also has transitioned into his crib for naps and nighttime sleep, and I have to say, he is sleeping really well in it which is so nice! I have also started Noah on a schedule. He "Eats, Plays and Sleeps" every 3-3 1/2 hours during the day (however, I am a bit flexible with it), and he has really taken to this schedule. It def. might not work for every baby, but for Noah, it has been exactly what he needed. I knew deep down that he was a good sleeper (esp. since he was a great sleeper for the first couple of weeks), but he def. needed a little help getting himself organized to bring out this great sleep.  So for us, the magical ingredients to his new found good sleeping patterns were: a consistent bedtime of 7pm, a consistent wake time of 6:45-7:15am, a consistent bedtime ritual, the miracle blanket, loud white noise, the crib and a flexible 3 -3 1/2 hour "Eat, Play, Sleep" daytime routine. Now, Cole and I have our evenings together, and Noah is sleeping happily from 7pm-7amish with 1-2 night feedings. We are hoping over the next couple of weeks/months, he might even be sleeping through the night... Here's hoping! For those of you who are interested, I got most of these sleep ideas from Moms on Call. I talked to several moms who used this program and everyone who used it said it was such a life saver. So, I did a bunch of reading/research about it and decided I would give it a try. Then, viola....it worked for Noah and us!! Our family of 3 is much happier and better rested now!

Here is a rundown of Noah at 2 months:

Likes: smiling and cooing, his hands, the boob juice, his vibrating bouncy seat and the hanging animals that attach to it, his play mat, white noise, music, being held, his stroller, bath time, his dog rattle, the Baby Bjorn carrier, singing/humming, his crib, listening to stories, naked time, being outside

Dislikes: not getting a good nap, peeing on himself, hats

Other News: Noah's hair is growing back, and it looks like he will have brown hair. I am hoping it is going to be curly like his daddy!