We had our 7 month check up this week with our midwife. All is looking good with both Baby Noah and myself. My belly is measuring 29 cm, and I gained another 5 lbs this month which brings my total weight gain to 22 lbs. Judith said this is great, and my blood pressure and hemoglobin were also good. I had to take my glucose screening test to make sure I do not have gestational diabetes. No news is good news with this test, and so far I have not received a call. They said they would call by Wednesday or Thursday if I did not pass, so I am keeping my fingers crossed that no one calls me today and I passed! I was a bit nervous going into this test since I had some glucose challenges when we were trying to get pregnant. My midwife reassured me that just because I had PCOS before getting pregnant does not mean that I will have gestational diabetes during pregnancy. Only some women with PCOS have a higher chance of having gestational diabetes. This made me feel much better!! From this point forward I will be seeing my midwife every 2 weeks instead of every month since we are in the homestretch. I cannot believe that Noah will be here in less than 12 weeks!

I realized recently that I never explained why we chose the name Noah Allen for our son. So for those who do not already know, here you go:

Noah: Cole and I both really liked the name Noah even before becoming pregnant. Then, once we became pregnant and starting researching baby names, I found out that Noah meant "peaceful". Of course the yogi in me knew from that point on that our child would have to be named Noah. :) We even decided to name our baby Noah regardless of the sex, we would just spell it differently (Noah for a boy and Noa for a girl). Once we found out he was a "he", we immediately starting calling him Baby Noah!

Allen: Allen is Coleman's dad aka. Daddy Smith's first name. Daddy Smith has a very special place in both of our hearts and means the world to both of us. As many of you know, Cole loves everyone, but I have to say, his dad ranks very high on his list. He is Cole's ultimate best friend and "hero". I know he hopes to be half the dad he is, so we felt it was only right to name our son after him. We love you Daddy Smith!

Below is a photo of my 28 week baby bump. Cole and I are headed to the beach this weekend for the week to have our Babymoon. We are so excited!! Thank you so much to Russell and Fran for letting us stay at their beach condo for the week! Photos of the trip will be coming soon! 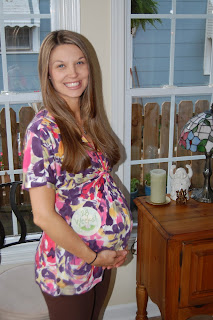 Email ThisBlogThis!Share to TwitterShare to FacebookShare to Pinterest
Labels: Pregnancy